Even those of us in landlocked Colorado, 745 miles from the nearest shore, rely on the ocean. The ocean absorbs large amounts of the carbon dioxide that we release, provides us with tasty seafood, is a major source for pharmaceuticals, and generates 70 percent of the oxygen in our atmosphere[1] But our oceans are at risk. Unless we do something about it, ocean acidification (OA) will continue to threaten and erode the marine life that our economy relies so heavily on.

The ocean absorbs about a third of the excess carbon dioxide (CO2) in our atmosphere, causing ocean acidification. When CO2 reacts with water it forms carbonic acid.[2] This process makes the ocean slightly more acidic. In recent years, pH has declined from 8.2 to 8.1 and it is predicted that by 2100, pH will decrease to 7.8. A decrease of 0.1 may sound insignificant, but keep in mind that if that pH change happened in our bodies, we’d die.[3] 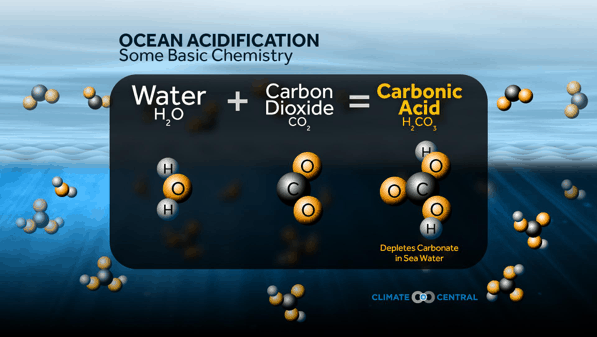 This slight decrease in pH has a detrimental effect on marine life. When CO2 is absorbed by ocean water, carbonate ion concentration decreases, hindering coral calcification and mollusk shell growth. As the water turns less alkaline, dissolution of the skeletons and shells begins to occur as well.OA is directly responsible for the dwindling populations of mollusks that we consume, like oysters. And while we always have the option of Rocky Mountain oysters, it’s nice to have an actual oyster now and then.

Coral reefs serve as a shelter for a diverse collection of marine life. Additionally, small organisms on the bottom of the food chain such as plankton and pteropods are crucial for the survival of bigger fish. OA thereby endangers commercial fish like snappers and groupers who live and breed in coral and salmon who depend on pteropods as a food source.[5]

Fisheries will collapse if OA continues. The Pacific Northwest oyster fishery is a multi-million dollar industry and it will collapse if OA continues to impede oyster shell growth.Worldwide, mollusk fisheries could lose $139 billion annually.[6] How does this impact us in Colorado? Well it’s a simple example of supply and demand. As the supply of oysters, snappers, groupers, salmon, and other commercial fish declines while the demand remains constant, we’re going to see a sharp rise in the price of the seafood which we enjoy.

In Colorado, we rely on the oceans for much more than just seafood. Scientists say that we are up to 400 times more likely to find new drugs in the sea than on land. With 95 percent of the ocean remaining unexplored, the ocean holds a lot of potential for the pharmaceutical industry.[7]

Additionally, 70 percent of the oxygen that we breathe is generated by phytoplankton and other marine life.[8] Though the ocean isn’t near, the oxygen that it generates circulates through our atmosphere and we depend on it.

The future of our planet looks grim with the current trend of ocean acidification, but there is still some hope out there. There are several organizations such as the Mote Marine Laboratory and Aquarium that have started coral nurseries to rebuild reefs that are declining.[9] Mote “rescues” coral fragments and uses a micro-fragmentation and fusion method to grow corals and plant them on depleted reefs off the coast of Florida. Their efforts are helping to recreate the ecosystems which shelter and feed our seafood, which contain the pharmaceuticals of the future, and which symbiotically interact with the phytoplankton and algae which generate the air that we breathe. 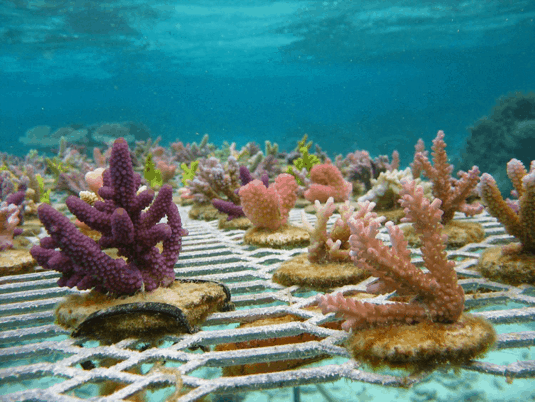 The efforts by Mote and other such labs are noble, but won’t make a difference if we continue to emit enormous amounts of carbon dioxide into our atmosphere. That’s where you come in. Reducing your carbon emissions will directly help to slow ocean acidification. There are a multitude of ways to reduce carbon emissions, and here are some starting points: