The Forecast: Winter of Discontent, Chance of an American Spring

ALSO POSTED BY:
Huffington Post
20 September 2011
When House Speakers John Boehner said last week that his relationship with President Obama is like a conversation between “people from two different planets“, he identified a disconnect that extends well beyond the House and the White House. 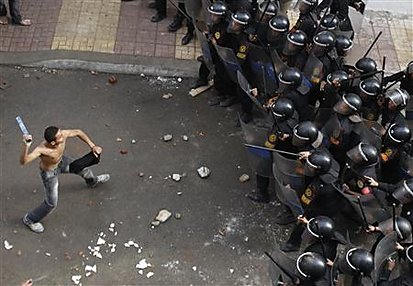 We are two Americas headed for collision. New York Mayor Michael Bloomberg touched upon it with his recent warning about the rising frustration of young people who have graduated college but cannot find jobs. The riots in Cairo could happen here, the mayor said, and he’s correct.
Several factors that triggered the Arab Spring are present in the United States today, including crony capitalism, political corruption, poverty and the unmet aspirations of the young. In neighborhood after neighborhood, and in home after repossessed home, the American dream is in shreds while the gap between rich and poor has become a canyon.
Watch for trouble if Republicans in Congress remain adamant this fall about protecting corporations and high-net-worth individuals from tax increases, while cutting programs that benefit the middle class and provide a safety net for the poor.
How polarized is our economy? Let’s start with Mayor Bloomberg’s point about the young. Matthew Klein noted in the New York Times that one in four Egyptian workers under 25 were unemployed when the revolution began there. Last July, the same percentage of young people was unemployed in the United States — the highest jobless rate of any age group in America.
Unemployment is even higher for minority youth. The National Urban League reports that more than one-third of America’s minority youth are unemployed. The average unemployment rate last July was 39 percent for urban African-American youth and 36 percent for Hispanic youth.
The impact can be profound. A survey in the United Kingdom found the psychological impacts for young people who cannot find work include panic attacks, depression and self-loathing. Other researchindicates that when young people are unable to find employment, they suffer lower wages and higher risk of joblessness for years to come.
An analysis of youth uprisings in Egypt or Tunisia, published by Bloomberg Businessweek, could apply equally to the United States:

In each of these nations, an economy that can’t generate enough jobs to absorb its young people has created a lost generation of the disaffected, unemployed, or underemployed — including growing numbers of recent college graduates for whom the post-crash economy has little to offer… While the details differ from one nation to the next, the common element is failure — not just of young people to find a place in society, but of society itself to harness the energy, intelligence, and enthusiasm of the next generation.

The millions of young people who cannot get jobs or who take work that does not require a college education are in danger of losing their faith in the future. They are indefinitely postponing the life they wanted and prepared for; all that matters is finding rent money…The uprisings in the Middle East and North Africa are a warning for the developed world.

Evidence of polarization goes well beyond our young. The average pay for CEOs in the U.S. is 185 times higher than the average worker’s salary. Average income is $31,244 for households in the bottom 90 percent of the economy, compared to $27 million for households at the top of the economy (one hundredth of one percent).
It is increasingly obvious the opportunity society is rigged against most Americans. William Dornhoff, the sociology professor who wrote Who Rules America?, quotes this revealing analysis by an investment manager who works with wealthy clients:

Unlike those in the lower half of the top 1%, those in the top half and, particularly, top 0.1%, can often borrow for almost nothing, keep profits and production overseas, hold personal assets in tax havens, ride out down markets and economies, and influence legislation in the U.S. They have access to the very best in accounting firms, tax and other attorneys, numerous consultants, private wealth managers, a network of other wealthy and powerful friends, lucrative business opportunities, and many other benefits…In my view, the American dream of striking it rich is merely a well-marketed fantasy that keeps the bottom 99.5% hoping for better and prevents social and political instability. The odds of getting into that top 0.5% are very slim and the door is kept firmly shut by those within it…
(T)he bottom line is this: A highly complex and largely discrete set of laws and exemptions from laws has been put in place by those in the uppermost reaches of the U.S. financial system. It allows them to protect and increase their wealth and significantly affect the U.S. political and legislative processes. They have real power and real wealth. Ordinary citizens in the bottom 99.9% are largely not aware of these systems, do not understand how they work, are unlikely to participate in them, and have little likelihood of entering the top 0.5%, much less the top 0.1%. Moreover, those at the very top have no incentive whatsoever for revealing or changing the rules. I am not optimistic.

While Speaker Boehner and his colleagues warn against new taxes, some of our biggest corporations pay little tax or none at all. Earlier this year, Sen. Bernie Sanders (I-VT), identified the top 10 “tax-dodging corporations”. He found that Exxon Mobil made $19 billion in profits two years ago, but received a $156 million tax rebate from the IRS. The Bank of America made $4.4 billion in profits last year, but received a refund of nearly $2 billion. (Bank of America also received a federal bailout of nearly $1 trillion. Now its officers are considering cutting as many as 10,000 jobs.)
Other big companies that Sanders found paid no taxes in recent years are General Electric, Chevron, Boeing, Valero Energy, Goldman Sachs, Citigroup, ConocoPhillips and Carnival.
As for political corruption, there is no hiding the fact that big money controls Congress — a situation bound to get worse due to the Supreme Court’s decision to abolish limits on corporate campaign contributions. One example: A recent poll showed nearly 60 percent of Americans want to repeal taxpayer subsidies for oil companies. Congress has refused. Senators who blocked a vote on subsidy reform earlier this year reportedly received five times more money from the oil and gas industries than Senators who wanted a vote.
* * *
As we have seen from the Middle East to London, and in some of America’s poorest neighborhoods, a citizenry that is disenfranchised and suppressed by a system feels no loyalty to that system — no obligation to sustain it, or even to obey its laws. That’s when things get ugly.
Will that happen here? If Republicans remain adamant against tax increases for the richest corporations and families in our country, the underclass may conclude it is not represented in a Congress whose members are paid $174,000 a year ($223,500 for Boehner), whose median net worth is more than $900,000, and whose pensions and health-care benefits are secure.
The way to avoid class warfare is class compassion. For the sake of discussion, think how the social and political dynamic would change in the United States if we saw these developments:

These are fantasy scenarios. But in the real world, it’s the kind of “we’re all in this together” citizenship that would help restore an opportunity society.
We need transparent fairness in our tax and political systems, a sense of social responsibility by those most blessed with wealth, and compassion for those who want to work for their share of the American Dream, but cannot.
*****
Bill Becker is a senior associate at the London-based sustainability think tank E3G and at Natural Capitalism Solutions in Colorado. This post is excerpted in part from articles he wrote for the current issue of the Crisis Response Journal and next January’s issue of the journal Solutions. For more information on how to assess and manage climate risks, see the E3G study “Degrees of Risk.”