"Can Climate Capitalism Save the World?" by Joel Makower 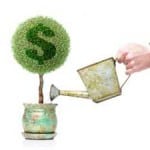 It arrived.Principles of Climate Capitalism