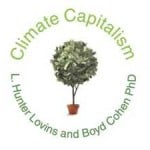 [fusion_builder_container hundred_percent=”yes” overflow=”visible”][fusion_builder_row][fusion_builder_column type=”1_1″ background_position=”left top” background_color=”” border_size=”” border_color=”” border_style=”solid” spacing=”yes” background_image=”” background_repeat=”no-repeat” padding=”” margin_top=”0px” margin_bottom=”0px” class=”” id=”” animation_type=”” animation_speed=”0.3″ animation_direction=”left” hide_on_mobile=”no” center_content=”no” min_height=”none”][GreenBiz Editor’s note: This is the first in a series of excerpts from “Climate Capitalism: Capitalism in the Age of Climate Change,” by L. Hunter Lovins and Boyd Cohen, just published by Hill and Wang.]
The CEOs of the companies implementing greater sustainability in their business practices may not recognize it, but they are following the principles set forth a decade ago in this book’s predecessor, Natural Capitalism. These principles have proved to be some of the best guides a company can use as it embraces sustainability in its own operations. They also represent a roadmap to a sustainable economy.
The first principle, buying time by using all resources as efficiently as possible, is cost-effective today and is the best way to address many of the worst problems facing humankind while delivering premium returns on investments. There are many smart companies implementing this principle, from measuring and managing their carbon footprints with the Carbon Disclosure Project, to Mi Rancho Tortilla’s saving $175,000 a year by implementing efficiency measures because it knows it has to do so to meet Walmart’s Sustainability Scorecard. It and the other small businesses participating in Natural Capitalism Solutions’ “Solutions at the Speed of Business” program are enjoying returns on investment ranging from 100 percent to more than 600 percent.
Perhaps the best example of the success of efficiency is GE’s use of the Ecomagination campaign to regain the company’s status as an innovation leader. This commitment, little more than greenwashing when CEO Jeffrey Immelt announced it (all that GE did was to rebrand as “green” some of the products it was already making), is now the engine driving the company’s growth. Even in a down economy, Ecomagination revenues rose from $5 billion in 2005 to over $25 billion in 2010. It enabled GE to cut its emissions by 22 percent in 2009 compared to its initial goal of 1 percent in 2004. By 2015 GE reckons to cut the energy intensity of its operations by 50 percent.
In his annual letter to shareholders, Immelt confirmed that Climate Capitalism is good for the bottom line, reporting, “Ecomagination is one of our most successful cross-company business initiatives. If counted separately, 2009 Ecomagination revenues would equal that of a Fortune 130 company and Ecomagination revenue growth equals almost two times the company average.”
Efficiency buys time, but unless that time is used to redesign how businesses are run and how products are made and delivered, no amount of efficiency will solve the climate crisis or enable us to create a truly sustainable economy.
Smart climate capitalists are also implementing the second principle of Natural Capitalism: redesign how we make and deliver all products and services using approaches such as cradle-to-cradle concepts, Biomimicry, the circular economy, Design for the Environment, and others. Nature makes a wide array of products and services that run on sunlight, producing neither waste nor toxics. The design of macroeconomic systems and microeconomic enterprises should mimic healthy, native ecosystems in diversity, adaptability, resilience, and local self-reliance.
As Biomimicry’s founder, Janine Benyus, says, “After 3.8 billion years of research and development, failures are fossils, and what surrounds us is the secret to survival. The more our world looks and functions like this natural world, the more likely we are to be accepted on this home that is ours, but not ours alone.”
The Calera company is using seawater and 92 percent of the carbon dioxide waste from the Moss Landing, California, power plant to create cement in the same way that sea creatures create their calcium silicate shells. Every ton of cement the process makes sequesters half a ton of CO2, in just the way that coral reefs are formed. Investors include Vinod Khosla and Peabody Coal.
Recognizing that green plants do not see CO2 as the biggest poison of our time but rather use it to create starches and glucose, the building blocks of life, Dr. Geof Coates at Cornell and other scientists are mimicking this process, using CO2 and catalysts to make polycarbonates, a biodegradable plastic that is almost 50 percent CO2 by weight. “It’s highly abundant and really cheap,” says Dr. Coates. He is using similar catalysts to create Styrofoam from orange peels. Existing companies have huge opportunities to “intrepreneur” sustainable solutions, as well. GE worked with Walmart to commercialize more cost-effective LED light-bulbs and other efficiency technologies. Because of such success, GE committed $10 billion more to Ecomagination research and development to grow its portfolio of environmentally sensitive products, services, and technologies. The fact that the Chinese 11th Party Congress passed the Circular Economy Initiative, now a guiding factor in China’s massive investment in renewable energy and energy efficiency, should give all Western economies pause.
Achieving a truly sustainable economy will also mean managing institutions so they are not just efficient and innovative, but also restorative of human and natural capital, the third principle of Natural Capitalism.
Business as usual has degraded intact ecosystems and human communities around the world. To reverse this we will need to change how we define success. Ecosystem services such as a healthy climate, soil fertility, and the restorative capacity of an intact biosphere are not presently on any company or country’s balance sheet. Yet they underpin the capacity of the planet to sustain life and thus the economy. So long as our economic and accounting system treats them as having a value of zero, it will be impossible to implement any sort of capitalism that can deliver enduring wealth and well-being.
Excerpted from “Climate Capitalism: Capitalism in the Age of Climate Change,” by L. Hunter Lovins and Boyd Cohen, published in April 2011 by Hill and Wang, a division of Farrar, Straus and Giroux, LLC. Copyright © 2011 by L. Hunter Lovins and Boyd Cohen. All rights reserved.[/fusion_builder_column][/fusion_builder_row][/fusion_builder_container]

"Can Climate Capitalism Save the World?" by Joel MakowerThe Book is Launched