The Ethical Practice of Torch-Passing

ALSO POSTED BY:
Huffington Post
24 July 2012
In the olympics of living, there used to be a moment when an older generation “passed the torch” to the next generation in line.
In his inaugural speech a half-century ago, John Kennedy declared “The Torch has been passed to a new generation”. 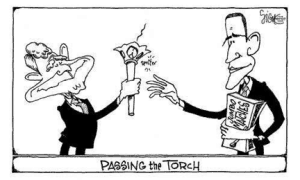 Washington Post columnist David Broder used the same phrase when Bill Clinton became the first baby-boomer to be elected President of the United States, shaped by influences far different than his predecessors experienced during World War II.
After the disenchanted class pitched their tents in the streets last year, journalist Gregory Stanford wrote: “The nation’s Occupy movement has picked up the torch that Martin Luther King Jr. once carried to light the path to justice.”  National Review blogger Mark Steyn used the same phrase last December in an analysis of events in Egypt.
But today as the leading edge of the baby-boom generation reaches the traditional torch-passing age, the tradition is obsolete. The mores, norms, policies and behaviors of past generations have left the torch in far too poor a condition to pass in good conscience. Insofar as we can fix it, we all need to get a grip:  Baby Boomers as well as Generations X, Y and Z.
I was born in 1946. At my age, my parents and their parents were retired, or waiting impatiently for the day they could. They could be confident that they world they were passing to their children would offer more opportunity, better quality of life, more economic security and better health than the elders had enjoyed.
That is not the case today.  The intergenerational torch has been dimmed by problems such as global climate change, dysfunctional institutions, growing economic disparity, poor diets, intense political polarity, the lack of common cause among us, the influence of money on public policy, the radical fringe groups that have attained prominence despite their obvious intellectual deficiencies, and the well-funded defense of business as usual by industries whose sociopathic greed drives several of the problems I just mentioned.
There will come a time when my contemporaries and I will begin to lose our health, our stamina, and the fire in our bellies. With every aching joint, fading brain cell and sleepy afternoon, we will want to retire not only from our careers, but from worrying any more about the world and its problems.
However, there is an ethical as well as a physical dimension to when that moment comes.
We should not pass the torch until we make it much brighter, or until we die trying and our children have to pry it from our cold dead hands.

The Future We Want is Now, According to Sustainability Expert William BeckerWhen Students Become The Masters: The Importance of Embedding Sustainability in Secondary Education Curriculums