Can We Handle Nature's New Norm? Part 2 of 3

ALSO POSTED BY:
Huffington Post
8 September 2011
This is the second in a three-part post. Part 1 describes how some key political leaders are reacting to today’s extreme weather events. Part 2 lays out some of the factors that are producing a perfect storm of vulnerability. 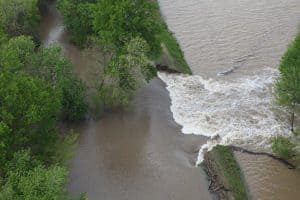 Whether or not we are ready to conclude that today’s extreme weather events are linked to global climate change, it would be utterly irresponsible for us to ignore the possibility.

Failing to minimize and manage the risk is a dereliction of duty to everyone who is vulnerable. That includes us all in one way or another, as victims or taxpayers. Ironically, our own practices over the last century have made us more vulnerable. For example:
False Security: We have spent billions of dollars on dams, levees and other structures to protect lives and property from floods, the most common natural disaster in the United States. These structures have saved lives, but they’ve also produced a deadly false sense of security.
Many levees were built originally to protect sparsely populated rural areas and farms. Over the decades, people and property moved in, assuming the levees would protect them. But the levees do not meet the standards required for populated locations.
In reality, no engineer can predict with certainty what nature will do and no structure can guarantee our safety. There are countless examples, including those in the news today, of communities flooded despite the presence of engineered structures. But the most iconic example is Rapid City, South Dakota, which believed it was protected by dams. On the evening of June 9, 1972, a storm stalled over the city, dumping hundreds of tons of rain. One flood control dam was breached; the rain fell below a second dam, making it useless. Nearly 240 people died, more than 3,000 were injured and damages reached $165 million (more than $820 million in 2009 dollars).
Aging Infrastructure: There are more than 85,000 dams in the United States today; their average age is 51. In dam years, that’s old. The latest analysis by the American Society of Civil Engineers (ASCE) found that 15,237 dams are considered high hazards and more than 4,000 are unsafe. Overall, ASCE gave America’s dams a grade of D.
Levees got an even worse grade. There are more than 100,000 miles of levees in the United States; 4 of every 10 Americans live in locations ostensibly protected by them. The ASCE grades their condition as D-minus.
Deferred maintenance is part of the problem. Nearly 90 percent of dams and 85 percent of levees in the United States are locally owned. The federal government may have helped build them, but maintenance usually is the responsibility of the farms, drainage districts and communities they were built to protect. Many communities have not been keeping up; budget problems suggest they cannot catch up.
In 2009, the Association of State Dam Safety Officials estimated it would cost $50 billion over five years to repair existing flood control structures, and another $12 billion over 10 years to eliminate the backlog of deficient dams. When the National League of Cities surveyed its members about their budgets two years ago, local governments reported they were facing a collective shortfall of as much as $83 billion in the 2010-2012 period. Since the survey, municipal finances have worsened.
Federal budgets aren’t any better. At the same time Congress is trying to reduce government spending, the U.S. Army Corps of Engineers needs $2 billion to restore flood control systems from this year’s floods along the Mississippi River alone. Even if Congress finds the money, the Corps says repairs won’t be done in time to protect Mississippi River communities anytime soon, even from average flooding.
Deadly Demographics: While floods are the most common weather disaster, heat is our No. 1 weather-related killer. An average of 1,500 Americans die each year in heat waves, more fatalities than are caused by hurricanes, floods, tornadoes and lightning combined.
The National Weather Service reports that heat records were broken 2,755 times in the United States during July. Dozens of people died from heat-related causes and nearly 200 million Americans were affected. The most vulnerable segment of the population is people 65 years old and older, a group that’s expanding rapidly as baby-boomers age.
Degraded Ecosystems: We have damaged or destroyed many of the natural systems that could make us safer for free. Hillsides whose vegetation once absorbed rainwater have been denuded by logging and farming. Rivers have been channelized to remove the “meander” that slowed the flow of water and created pools, backwaters and side channels. Wetlands have been destroyed to make way for farmland and urban development.
Altering ecosystems for commerce also has turned out to be risky business. Over the last century, federal water projects have installed locks, levees and weirs to control the Mississippi River and promote shipping. It now seems likely those alterations have made flooding worse.
* * *There aren’t the only clouds on the horizon. Climate scientists predict that storms will get more powerful and more common, and hazard areas will get larger. With more precipitation, water flows are likely to exceed the design capacity of more flood control structures, as they did along the lower Mississippi River and in Minot, North Dakota, this year. In other places, as Texas and Oklahoma are finding, prolonged droughts spawn another type of disaster — wild fires.
Given these many vulnerabilities, you’d think national leaders would be hard at work retooling public policies to reduce our risks. Some are. The Obama Administration is working on a national climate adaptation plan, regulation of greenhouse gas emissions, and clean energy R&D. Last December, the White House directed that federal water projects give full consideration to nonstructural flood control and to ecosystem restoration.
But Congress is a different story. Since taking control of the House last January, Republicans have launched one assault after another on federal efforts to understand and address the risks of global climate change.
Given the weather, we would be smart to press all candidates for office in 2012 to tell us what they will do to manage America’s growing climate risks. At the same time, we know the economy is struggling and governments are broke. Much of what we need to do to reduce climate instability and its impacts will have to be done locally and at relatively low cost. That will be the subject of Part 3.

******
Bill Becker is a senior associate at the London-based sustainability think tank E3G and at Natural Capitalism Solutions in Colorado. This post is excerpted from articles he wrote for the current issue of the Crisis Response Journal and next January’s issue of the journal Solutions. For more information on how to assess and manage climate risks, see the E3G study “Degrees of Risk“.

Follow William S. Becker on Twitter: www.twitter.com/sustainabill
Integrity. Here’s hoping I can live up to that.Can We Handle Nature's New Norm? Part 3 of 3